Or a horse named Finn! Recently I took on a project/problem horse named Finn. He is a black 7 yr old 15’2 cob. He has a fantastic temperament and is a very well put together cob, however Finn has some massive holes in his training foundation.

Now when most people buy a horse, his problems are either covered up, not mentioned, or phrased in a way to make them appear to not be a problem. Phrases such as, very forward going, or not a novice ride.

Finn was purchased as a problem horse. As a problem horse, you’re never entirely certain what you are getting. I know he has hunted and has done cross country. I know he was unsuitable to his previous owners because he was “overly sensitive”, “a bit spooky”, “tendency to run”, and “will jump anything”.

I’m not a complete fool, and spent a little bit of time with Finn prior to bringing him home. What I found was a very sweet, very clever, and extremely sore horse. He absolutely refused to flex right or left, and upon further inspection, I found his low back to be extremely sore to the touch. 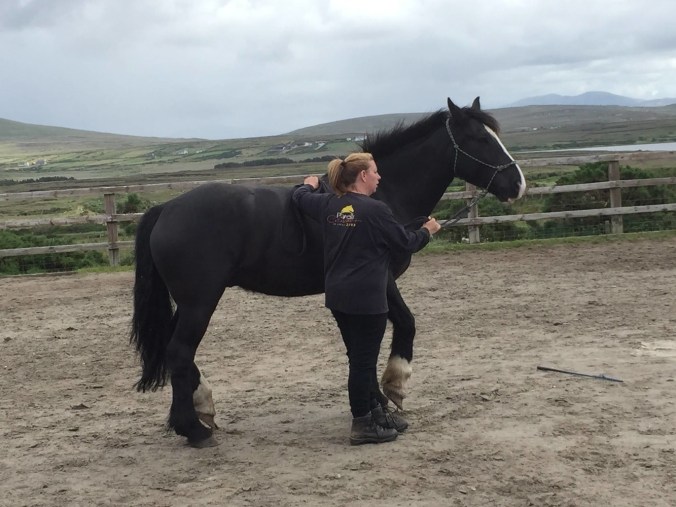 I was able to get him to join up, but did see a tendency to over react when pushed, and he threatened to jump the arena fence on a few occasions. I didn’t see anything that wasn’t fixable with time, so Finn came home.

First off I had his back done. That alone relaxed him quite a bit. So then we started working on the basics. Moving his feet, bit of forwards and backwards, bit of flexing, some circles, keeping his attention, some de-spooking, testing and asking.

Its been about a month now and I’ve dug out his biggest issues. The biggest problem is his tendency to over react and then run. Its clear he is very concerned with doing the wrong thing. He will anticipate, attempt what he thinks is coming next, and, if he is wrong and a correction is necessary, his brain freezes and he legs it! Once he shuts is brain down, he becomes very strong, and is very hard to stop. He is a fearless jumper, and once in run mode, will attempt to jump anything.

As a bit of an experiment I attempted to long rein him. As I suspected, there is no response to the bit. The nose goes up, and he pulls his way to a run. Asking for a traditional “whoa” gets nothing but a faster run.

I suspect he has hunted a great deal. He has probably been run in a pack and stopped with the pack.

There is a great deal of work to be done if Finn is going to go on to have a happy life as a riding horse. I am not daunted, and look forward to the experience.

Something to Learn from a Fearful Horse