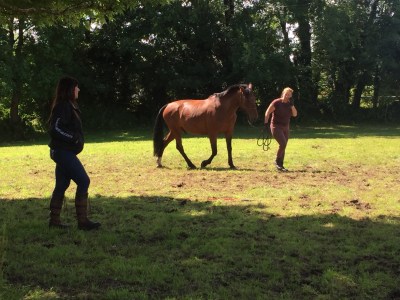 Problems are primarily napping and threatening to buck while hacking out as well as trailer issues. Owner suspects respect issues, as he can be bossy and difficult to manage. Attitude/behaviour is unpredictable as one day he is fine, and other days he is definitely not so fine.

Charlie was a lovely, stocky horse. I found him to be over-reactive when given direction, with a tendency to do far more work then necessary. Initially a lot of running and sideways/backwards on the circle, making his napping problem very evident.

When faced with something he didn’t like or understand, his first reaction was to become big and pushy, and attempt to go sideways or backwards. Issues on his offside, making him far worse when working on that side. This also effected change of directions on the circle. He picked up backing up very quickly, but had very little desire to come forward once backed.

This horse was stuck in his feet for forward movement when things were scary, uncertain, or his stress levels/adrenaline was up. His default reaction was sideways or backwards, both on and off the circle. This was causing his napping problems while ridden.

Also the usual dislike to having people on his offside, and the general lack of attention or interest in what the human was asking.

Work included working on a circle, helping him realise he was doing far more work then was required or being asked for. Cheating with a wall to block his sideways habit to help him understand forward.

Work on both sides to gain acceptance of the human. Work with various scary objects to get engagement and understanding of humans tools and items not being scary.

Work on gaining draw and attention at all times, to increase the willingness and desire to pay attention, do whats asked, problem solve, and not over react.

Work with owner on using ropes and some advanced groundwork with the trailer and obstacles.

At the end of the 2 days Charlie was relaxed, calm and obedient. He understood what was being asked of him, and was in the right (left actually) mind to problem solve without becoming wound up and agitated. He understood to move forward, and had a very strong desire to be with and pay attention to me. We were able to do some liberty work as a small test, and he followed me around like a puppy.

Things for his owner to work on:

The trailer is still a scary place for Charlie. He has rarely been inside one, let alone traveled in one. I advise to bring him into the trailer a few times, prior to actually taking him anywhere. Lead him in normally (don’t look at him!), but at first signs of reluctance, send him in by putting pressure on the girth. Make sure he is always lined up to go in. After a few times of being in with the doors closed, do some fairly short trips.

Always work with Charlie prior to doing anything that would constitute “work” (trailering included).

Work on forwards and backwards, try to keep him looking with both eyes, and try to work towards straightness through his body. If his attention drifts, ask him to give you both eyes. If he is reluctant to come forward, use the zig zag motion to (walking one way then the other) to bring him forwards. Always work towards doing less (asking nicely). Ask as much as you have to, but as little as possible.

When working on the circle, be sure to maintain distance. If he starts getting to close, push the shoulder out. Move which ever part is not doing the right thing (nose to get him on the circle, girth for forward, hind end to get him to stop and look at you).

Possible problems on the circle: changes of direction, if he puts his head up and blocks or ignores, walk towards his hind end till he changes his eye and is tipping towards the other direction. If he starts going sideways, use the wall to remind him forward is the correct thing, if he goes backwards, travel with him, trying not to give him anything to pull on, and keep patiently asking for forwards.

Reminders:
try to ask as little and lightly as possible, but as much as you have to.

When he’s doing what you want, relax and let him do it. Don’t nag him.

If your having a bad day, don’t work with him. If things start going wrong when your working, do a quick back up so you both win and put him away.

When riding, at the first sign of his attention drifting, paired with his adrenaline going up (high head, quick step, tense under the saddle), get off and ground work him until he settles.

Always maintain a safe distance. If at anytime during ground work, you feel he is to close, stop and back him up.

He responds well to the voice. If he is being good, tell him, if he is feeling a bit nervous, talk to him.

No eating grass during work. Rewarding with grass at the end of a session is good.

Try to remember to always move Charlie around you, not you around him. Try not to move your feet if possible during backups and circles.

Somedays you may only need 5 min to gauge where his attention and attitude is. If he is calm and obedient, there is no need for anymore work, unless you want to do some advanced ground work.

From the owner:
“Myself and my horse Charlie spent the weekend with Johanna. He had a few behaviour issues that needed addressing. Amazing. He has been a different horse since she left. He will now walk straight into his trailer, stand calmly & eat his hay while he’s in there. Previously he would rush in & straight back out again. He is generally a much calmer & more respectful member of the family. The work Johanna does is amazing, she is so calm and talks you through everything she does. Myself and Charlie are working on the things we have learnt from her. I wouldn’t hesitate to recommend her to anyone having behaviour issues with their horse & would love to work with her again in the future. Thank you so much Johanna, I am so so grateful to you”

*3 days after I left..* “I rode Charlie yesterday after doing our circles,just in the field as we are still waiting on the farrier !! He was calm and stood completely still while I mounted,something he has never done.”