How to Round Pen a Horse

This was originally posted on my www.roundpens-ireland.com site. 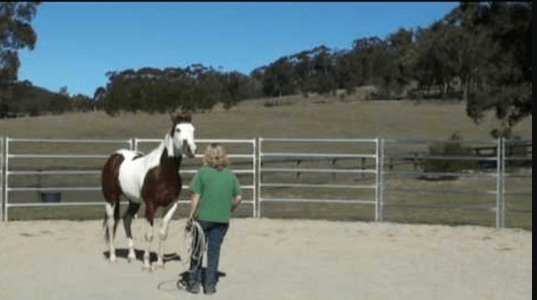 In this article I will cover the basics of round penning a horse. Some trainers (Monty Roberts for example) have made a career of round penning horses, and while it is a skill to be learned, its not rocket science. With practice and patience, anyone can be successful in the round pen.

When I first started horse training in the mid 90s, I read John Lyons book “Lyons on Horses”, I learned a great deal about the round pen. One idea that has always stuck with me is the concept that a horse in a round pen is like a bar of soap held against a wall with a finger. If you move your finger back (behind the drive line), the soap (horse) shoots forward. When you move your finger forward, the soap shoots back. This can be a very slight push back or forward on the soap to achieve movement. This is a great concept to keep in mind when starting round pen training.

I have to say, I believe a person should have a fairly good relationship with their horse prior to starting round pen training. This is particularly true for a novice. Round penning a horse is not about running them into the ground to get obedience. Experts can work with troubled horses and achieve amazing results, but for the average person who just wants a better relationship, a bit of draw, and a little fun at liberty, they should have a fairly obedient horse on a rope prior to using the round pen.

Once you have a good relationship with your horse on a rope, you are ready to begin. If your horse is new to the round pen, I would generally give them some turn out time in the round pen for a bit of time for a few days so the round pen doesn’t become a place they don’t want to be.

Most people who train using a round pen are trying to create “draw” from their horse. Draw is the horses desire to be with you. On a rope you mostly push and pull a horse, and, done properly, you will create respect. But respect does not necessarily creat the desire to be with you. This can be especially apparent with horses that are hard to catch. When your horse approaches you willingly, esp. In a large area, you have draw. If your horse chooses to follow you, with no head collar or rope, you have draw.

Initially your goal in the round pen is to create draw. Once you have that desire, you can move on to more exciting things (like obstacles, pedestals or jumping at liberty).

When working in the round pen, you are putting ideas into your horses head. You are showing him that you are a good leader, you are decisive, and that you are his friend and comfort. Draw will be achieved by keeping these 3 concepts in mind.

In a herd situation, the leader moves her feet very little, everyone else moves around her. In the round pen, you will work to move your feet as little as possible. The horse moves his feet a lot, and this means a great deal to him. In a herd, the leader decides who moves where. In the round pen, you will decide which direction your horse will go.

You will be decisive. Lastly the herd leader invites the others to her for grooming. You will in turn invite your horse in to you for friendship and comfort (and rest).

So now we put it all together. For the first few sessions, do not worry about what gait your horses chooses to move in. As long as he is moving when asked, he is listening to you. Generally a trot is a good gait. Again, I must stress, this is not about running them into the ground. If they choose to run, let them, but be sure to put in lots of changes of directions. A horse that bolts around in a circle continuously is not thinking. Every time he changes directions, he has to use his brain.

So you will enter the round pen and turn your horse loose. Try to stay to the centre of the round pen as much as possible to prevent undue mental pressure on your horse. Pick a direction, and focus all your energy behind the horses drive line (girth area) to make him go forward. Body language and subtlety is key. Initially you will have to do more, but keep in mind that ideally, you are always working to do less. If he does not go, flap your rope against your leg, and if you still get no movement, start marching towards him to push him forward. I would advise against lunging whips for this. For forward movement, keep focus just behind the girth, where your leg would sit. 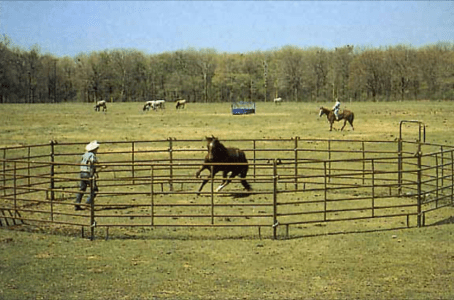 For changes of direction, ideally, your horse will turn in towards you to change. You probably wont get this at first, but you will want to work towards it.
So your horse is going around, your pushing him on if he gets a bit idle. You are always waiting for a chance to invite him in (this will eventually also lead to turns to the inside instead of outside). Signs will be, flicking his inside ear towards you, turning his head to look at you, or stopping and looking at you. As soon as you notice a sign, try to draw him in.

To do this you will step slightly in front of him (in the centre, not literally in front of him!) to try to catch his eye. If you feel he wants to come in, start moving backwards and see if he comes. If he stops and looks, that is good, its a step in the right direction.

If he chooses to run by, drive him by quickly. Give him a few more circles, then try again.
If you can get him to stop and look in, you can do one of two things. You can approach him, give him a rub in the face and then turn to walk away, and see if he comes, or you can change directions.

Initially, personally, I would try to get him to come with me, and save inside turns until I get my draw.

Its important that your horse maintains the direction you have chosen. Any time he changes direction and you didn’t ask for it, change him back. There are going to be times where you have to move quite a bit from the centre, thats ok.

If you can get your horse to face, but he won’t follow, use an arcing pattern. Walk up and pet him, then keeping your shoulder towards his nose, take a few steps towards his hind end in an arc (semi-circle) until he takes a step towards you, then do the same moving towards the other side. This will end up being a bit of a zig-zag, but generally gets him to follow. If during this he runs off, drive him off fast, and repeat the whole process again.

This should give you enough to get started with your horse in the round pen. As Always, I am always available for questions, comments or clarifications, just ask!

The Art of Despooking Part 2