The Story of Finn 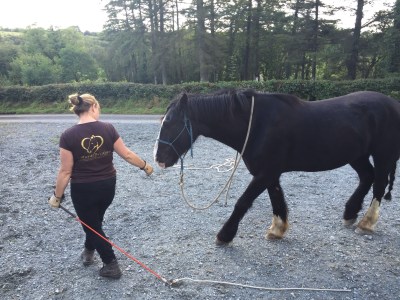 This is more of a case study then an article on training techniques. This is the story of Finn. Where he started, how far he’s come, and where he is going. If you have ever gone on a natural horsemanship journey with a “problematic” horse, you will find bits of your own story here.

If you have followed the story of Finn, some of this will be familiar, but for those of you unfamiliar with him, this is how his tail begins.

What I did know was that his previous owners found him unpredictable with a tendency to bolt. He was being used for beginner riders, and this situation did not suit them at all.

They had been told he had previously hunted, and saw a video of him doing cross country. Everything else about this horse has been an unknown.

I found him to be a very loveable horse. He has no badness in him whatsoever, but his prior training has left a lot to be desired.

In the beginning he was very over reactive to everything, and very worried about getting in trouble. His tendency to panic and bolt was clear immediately. 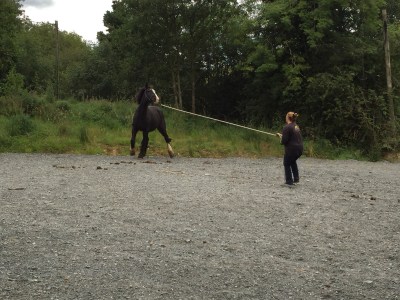 The first order of business was to put in a way to control the bolt. This includes bending and disengagement. He was stiff. Very stiff. I have some theories on this, and I will get to them later.

It took ages to get him bending, but he started to understand. He also started to trust me. The more trusting he became, the more pleasant he became. He loves the moment of being asked in and loved. He’d stand there all day, soaking in the comfort and love if he could.

This is what I like most about Finn. He’s a teddybear. Deep inside is a loving trusting horse, trying to come out. But boy did someone try hard to ruin it. 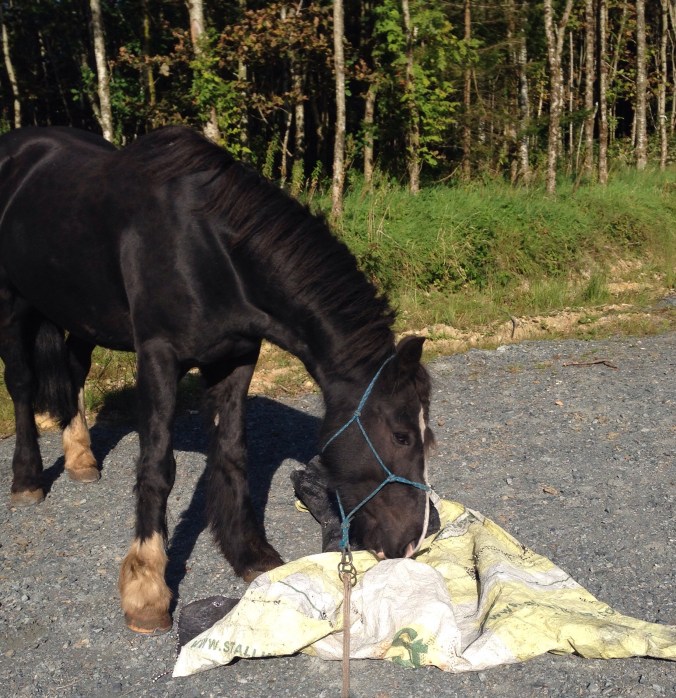 As I began to make his panic and running manageable, I began to push his boundaries. We despooked with loads of objects including balloons, flags and tarps (see Project Finn, and Youtube channel). I found him to be a lot like an untrained horse, but never considered this to be the case. More on this later. 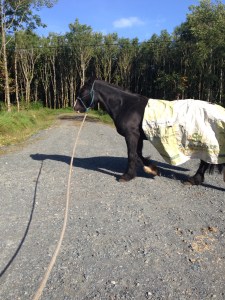 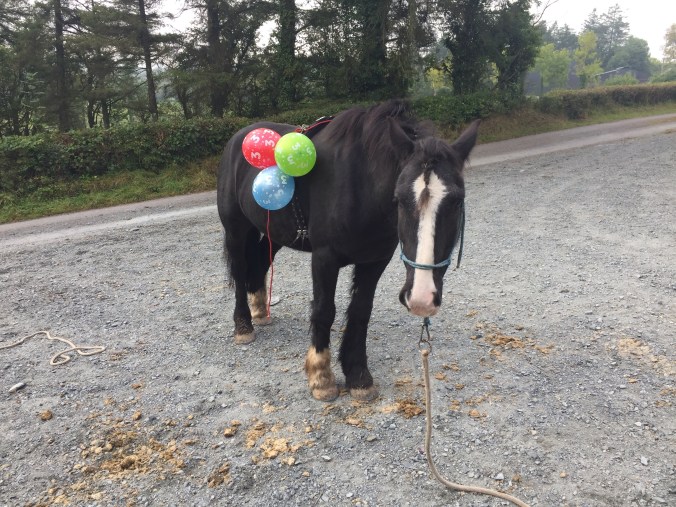 We started liberty work, and his calm demeanour began to shine through. 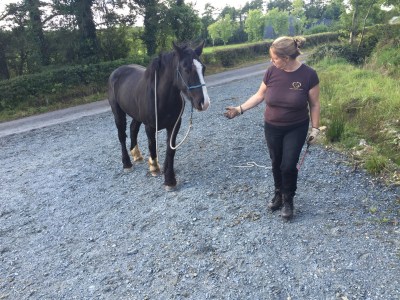 As we moved into Autumn, I began getting very busy with clients. Finn went on the back burner. I sent him to a friend who had recently lost her only horse.

She kept him busy while I was kept busy. She also fell in love with his personality. But as lovely as the situation was, it was not moving Finn towards his end goal of finding a new home.

Winter was upon me, and business was booming. Finn was still sitting idle. By Christmas I knew the situation had to change. And I begin to see my problem.

My problem is that, for me, Finn will always be a name on a list. And because clients always come first, he’s always at the bottom of the list. As much as I love Finn, I love my main horse Mr. Kippling more. And as it is, he hardly gets enough time. Finn needs an owner, not a trainer.

Finn deserves and requires the love and devotion only an owner can give. I can help him on his way, but I am to busy to give him what he truly needs. Love, attention, devotion, and most importantly time.

So that brings us to now. I have had Finn all this time, and changed him a lot. I have also managed to piece together some sort of history.

What I know, is that he is _extremely_ quiet to tie, tack, shoe, groom and trailer. These are things he has had to have done a lot. He came to me stiff, and reluctant to bend. Unusually reluctant. We did some riding this week, and I will talk about that shortly, but I expected it to be better for a 7yr old. 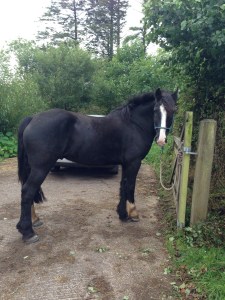 I made a concerted effort to give Finn a dedicated week of training to see where exactly I was with him.

I’ve been working him without fences, which means all of his work has been done online. Putting him on livery and having access to a round pen has been fantastic. Taking him off the rope has been interesting.

First day in the enormous arena, he had a great time. So much so, he didn’t want to be caught. Don’t blame him, he’s been on a rope for ages.

But all my work paid off, and eventually he got bored and came trotting up to me.

Working in the round pen, I found him reluctant to let me work in his right eye. Something I thought we had worked out, but you never truly know until that rope comes off!

We also worked on some advanced despooking, such as running up to him and then just petting. We did some long reining, and he was very good, too good.

All the work was building to a ride. To see if the bolt was gone. He is a broke 7yr old after all….

We approached his riding as if he were unbroken, just in case.

Day 1, online, in the round pen, he was excellent. Equivalent to the 1st week of an unbroken horse. Up and downs, walk and trot online both ways. He was a little uptight, but I didn’t give him a run first. I wanted to know. He did good.

Day 2, offline, in the round pen. I let him have a run first, and he was far more relaxed. A different horse really. Acted like an old pro. Walk, trot and canter. Bit unbalanced at the canter. Had 1 spook, but took 1 nervy step then settled. Excellent.

Day 3, big (massive) arena. He had a run, and did some jumping online. His jumping skills were excellent. Very tidy, and sets himself up well, but didn’t want to settle to be ridden. This was it, the true test.

What we found was a very green horse. He was fearful of his rider. Any noise from her and he wanted to run away. Good news, all the bending and disengagement paid off. Every time he tried to run, he got disengaged to a stop, and it worked. I can only imagine what he was like when he wouldn’t bend.

What was interesting is if she came in and circled me, he’d settle. At the moment I am his security blanket. This is why riding in the round pen went so well.

So here is what I have worked out. Finn was probably started in a cart or gig, hence the stiff reluctance to bend. He has a lovely 3 speed trot, and was probably a nice cart horse. One day someone decided to ride him. He stood for tack, why not, he’s been harnessed. And then they jumped up there.

He probably got no proper preparation for it and panicked. And ran. I’m sure it surprised them. So they hunted him, maybe twice, so they took him cross country.

Then he went to the dealer. Then my old owner got him as a 5yr old.
Poor Finn is not a broke 7yr old. He’s a hardly broke 7yr old. I bet you could count his rides on 2 hands.

In a way this is better. He’s not a badly broke horse, he’s a hardly broke horse. But this also means what he is lacking most is time. The one thing I struggle to give him.

And this brings us to the current chapter in The Life of Finn. What is missing is the last chapter.
I am going to do some work with a makeshift dummy of a laundry basket and willow (videos for sure!) to try to get him ok with something noisy, on his back, above his head.

But the last chapter is unknown. As we move into spring, I am very busy. I’ve been doing horses every day for the past 4 weeks, and am set to continue on a similar schedule.

I am offering Finn up for sale. He needs more then I can give him, I just don’t have the time he deserves. He needs love, attention and time. He needs a confident rider to bring him on slowly and build his trust. He is so sweet and loving, and deserves a happy ending.

If anyone is interested in taking him further, get in touch. Come and visit him. See where he is, and get a feel for where he needs to go.

I am willing to offer follow up training with his potential new home, if they would be interested. I want whats best for Finn. He deserves it. 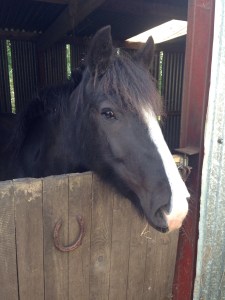 *Update on Finn* he found a fantastic home with a lovely girl in Donegal. A happy ending for Finn.